Joff currently holds the South African records for the largest single collector car auction, the highest commercial and residential property knockdowns, as well as for the highest bid on a single property lot. The dual best for highest overall record and commercial record is for the former Kyalami F1 Grand Prix racetrack, which he sold for 205 Million in less than 120 seconds. His residential auction record was set in Clifton Cape Town when he knocked down a Nettleton Ridge villa for 96 Million.

Joff?s unsurpassed expertise in leading both virtual and live sales means his professional services are in demand internationally. This South African industry veteran has, by invitation, conducted auctions in Hong Kong, Dubai, England and the USA, among others.

Joff?s qualifications match his talent and experience. He holds the internationally recognised CAI (Certified Auctioneers Institute) and AARE (Accredited Auctioneer Real Estate) designation degrees, and was the first South African to be awarded these certifications.

He is a specialist in auction techniques and strategies and has been a member of the global auctioneering body the NAA (National Auctioneers Association) for more than a dozen years. Joff serves as the South African ambassador for the NAA and is the only officially appointed ambassador of the organisation outside of North America.

He also served two terms on the board of the SA Institute of Auctioneers, the body that represents the interests of the industry and its clients across the country. Joff served directorships first on the Governance and Compliance Committee arbitrating disciplinary actions and consumer disputes with members, then as head of the Public Relations Committee promoting the industry on media and consumer platforms.

Joff is a regular lecturer at the NAA and in 2015 became the first and only South African auctioneer ever invited onto the judging panel of the prestigious annual International Auctioneer Championship, which draws entries from across the globe.

Joff has also become a leading proponent of virtual auctions. Since the outbreak of the Covid-19 pandemic, he has been invited to lecture on virtual auction technology and techniques in three countries. In the past year Joff has conducted webinars on the specialist subject for the national auction bodies of South Africa, China and Nigeria.

Joff?s dynamic style has made him popular with prominent local and international charities featuring royals, presidents, politicians and celebrities among their patrons. He has, among others, hosted international auctions on behalf of the House of Mandela Family Foundation in conjunction with Global Citizen, Hollywood A-lister Antonio Banderas, Prince Harry, the Duke of Sussex, Princess Caroline of Monaco and the Virgin group?s Richard Branson.

With more than 28 years of real estate expertise Joff is highly regarded by prominent property investors, portfolio fund managers, corporates and financial institutions because of his impressive track record of reading the market and realising the best value for clients? assets on the auction platform. 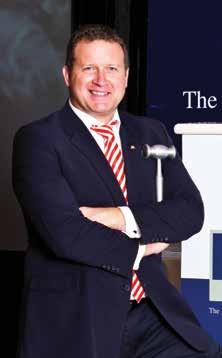